The first prefectural office was set up with the birth of Hyogo prefecture on May 23, 1868 (Keio 4).This is a restored building of the Hyogo office under the jurisdiction of the original Osaka-machi government office.The prefectural office including the governor’s office at that time, the former concentric mansion, etc. are reproduced, and you can experience the historical space.In addition, in the MR experience “Virtual Visit!”, You can experience the drama of the Meiji Restoration that took place in the first prefectural office.Wear time goggles and witness the story of the beginning of Hyogo prefecture.Please enjoy the fusion of historical atmosphere and cutting-edge experience technology. 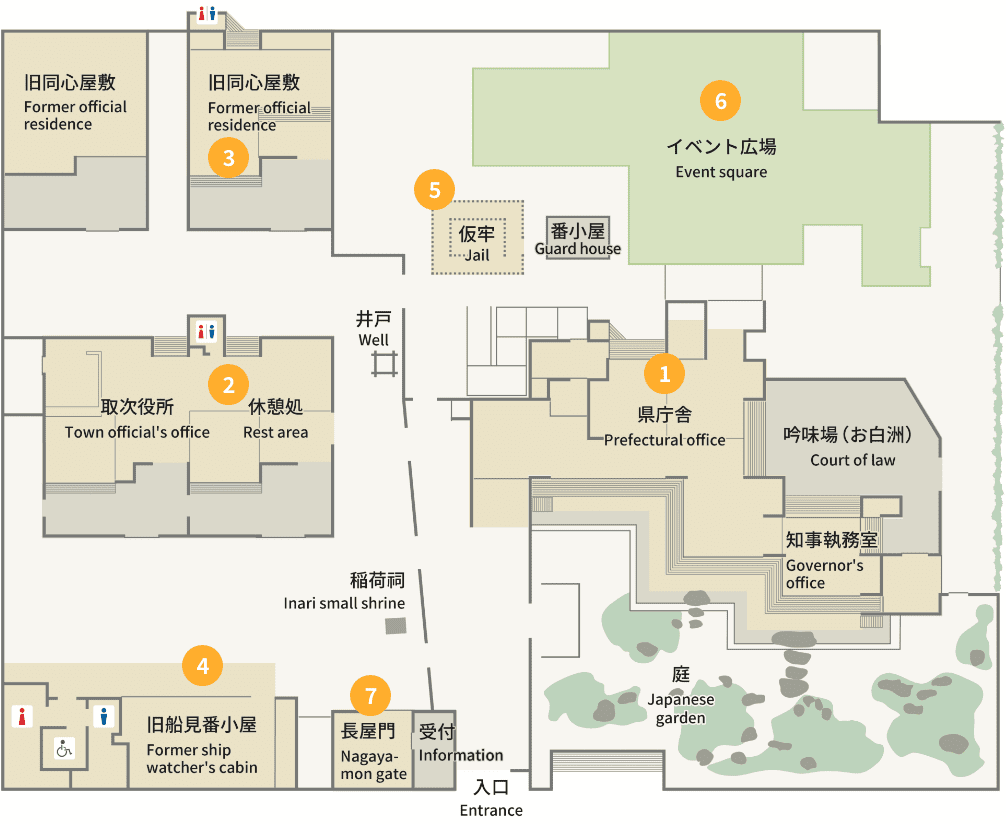 Highlights of the first prefectural office

This building was the official residence of a low-ranking official (concentric with the ground) who lived in Hyogo when he was a bureaucrat, but one of the leaders of each town in Hyogo worked here on a daily basis. It has become an agency that handles existing crackdowns and litigation.
With this restoration, it can be used as a cafe space or a break room.

This building is the official residence of a low-ranking official (concentric with the ground) who lived in Hyogo when he was a bureaucrat. When the Hyogo office was set up, three concentric people moved from Hida Takayama, and each was given a house site inside the office. The size of the mansion is determined to be 50 tsubo, and while living with my family here, I engaged in work such as patrols.
With this restoration, it can be used as a rental space where citizens of the prefecture can gather and interact.

An important role of the Hyogo office was to keep an eye on the ships sailing off Wadamisaki. A small building called Funamibansho was placed at Wadamisaki, and Funamiban took turns on duty. This room was a two-nagaya-style dormitory for Funamiban. Funamiban finished its role when it became the first prefectural office.
With this restoration, you can enjoy shopping as a museum shop.(Scheduled after Reiwa 4th year)

In this restoration, the temporary prison and nagayamon recorded in the pictures and paintings of the office were also restored.

It is an event space with a lawn in the image of the building range of the Amagasaki Domain Jinya era. It can be used as an outdoor dining / resting space, as well as a venue for events and special events.

The nagayamon is the front entrance to the prefectural office. A picture of the nagayamon and the earthen wall leading to the east remains in the book “Kobe Kanko” published in the Meiji era.